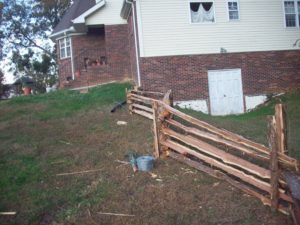 Be Sure That You Know How To Build Your Fence

Such men are dangerous men, self-righteous and arrogant unbelievers, foolish and vain in their conversations. Scripture describes them with these words:

“Because that, when they knew God, they glorified him not as God, neither were thankful; but became vain in their imaginations, and their foolish heart was darkened.  Professing themselves to be wise, they became fools, And changed the glory of the uncorruptible God into an image made like to corruptible man, and to birds, and fourfooted beasts, and creeping things,” (Roman 1: 21-23).

Pride That Blinds The Eyes

Thus they end up blinded by their own pride. They do not rightly understand the words they read, and they are too proud to permit another to teach them. Becoming overwhelmed by the arrogance of their own perceived knowledge, they cannot believe that God would ever speak to another with the extent of wisdom that they have erroneously claimed for themselves.

Look into the following example. Read and see the wickedness that accompanies knowledge of the Bible that is not supported by a desire to know God.

In Matthew, chapter two, we read of how wise men came from the east bearing witness in Jerusalem concerning a star in the east, and a good report. They cast about questions concerning a bold news, a good news, yea, an exciting news. They spoke of a strange thing; they spoke of the birth of the promised King of the Jews.

Scripture says that this news troubled Herod, the king of the day. It also troubled all the masses of Jerusalem. This message, spoken of, and cast about, by the gentile wise men clearly sounded throughout the land. Many people heard the message.

We read of how Herod called forth, and inquired knowledge from, the chief priests and scribes of the people. Now these were learned men, knowledgeable in the written texts of the known scriptures. Quoting from the ancient writings found in the book of Micah chapter five and verse two, they stated the exact birthplace of the promised King. Scripture records the words in this manner:

“1 Now when Jesus was born in Bethlehem of Judaea in the days of Herod the king, behold, there came wise men from the east to Jerusalem,
2 Saying, Where is he that is born King of the Jews? for we have seen his star in the east, and are come to worship him.
3 When Herod the king had heard these things, he was troubled, and all Jerusalem with him.
4 And when he had gathered all the chief priests and scribes of the people together, he demanded of them where Christ should be born.
5 And they said unto him, In Bethlehem of Judaea: for thus it is written by the prophet,
6 And thou Bethlehem, in the land of Juda, art not the least among the princes of Juda: for out of thee shall come a Governor, that shall rule my people Israel,” (Matthew 2:1-7).

Is not this an amazing thing?

These learned men of Jerusalem knew the scriptures that proclaimed the birth of Jesus. Furthermore, their knowledge was not limited to this sole passage. These were scribes and chief priests. Their knowledge of the known scriptures was in-depth and without any error in translation. They were well studied, and the language of the text was one of their own.

Yet they could not see the wisdom before them. They could not comprehend truth. They were speaking sacred words that were, at that very moment, coming to pass. Learned and respected men from another country were clearly proclaiming that the King of the Jews was born. Yet these religious leaders made no effort to dig deeper, to learn more, to search further, or to find and to see this King for themselves.

This is Bible knowledge that lacks a desire to know God. It is without wisdom. It will destroy you just as quickly, and perhaps even quicker, than no Bible knowledge at all. Flee from those who quote scripture but then deny that Jesus is God, dead for our sins, and, on the third day, raised again.

I plea now with each and every Christian, young and old, seasoned or newborn: find in your heart that wonderful desire to know Jesus face-to-face and truth-to-truth. Listen, learn, and keep an eager mind. Set into your memory the following words and live by them:

“And the brethren immediately sent away Paul and Silas by night unto Berea: who coming thither went into the synagogue of the Jews. These were more noble than those in Thessalonica, in that they received the word with all readiness of mind, and searched the scriptures daily, whether those things were so,” (Acts 17:10-11).

Thank you for reading my articles and stories. My goal is to glorify God, lift up the name of Jesus, and to provide quality-reading material.