↓
Home→Christian→Christian Resources→Freedom to Sin – Homosexuality, the Final Mark of a Society That Lives Beneath the Curse

Never before in our history have we so readily demanded the right to live without reproach or restrictions upon some perceived “right” to have our own desires. No one seeks the truth. No one hears the truth. And all will pay the consequences.

Upon reading the Monday morning Charlotte Observer, I came across an article that detailed a new California ban on therapy that is geared to help minors overcome a homosexual lifestyle. State Sen. Ted Lieu declares that “No one should stand idly by while children are being psychologically abused, and anyone who forces a child to try to change their sexual orientation must understand this is unacceptable.”

Now many Christians would immediately raise arms over this matter, yet the issue is not about counseling or therapy. It is about a demand that we, as a nation, accept homosexuality as a condition of birth. We are to believe that we are not issuing a license to sin, but rather merely permitting individuals to behave in a so-called natural manner. The Senator apparently believes that refusing to acknowledge sin is not the same as issuing a freedom to sin.

In principles concerning counseling, I agree with Mr. Lieu. Gay-to-straight therapy is not the answer to a heart problem. It is not a matter of taking fleshly control over wrongful habits and activities. It is, in stead,  an issue of submission to God, resisting untruths and calling upon Jesus to cleanse from within.

Faulty Therapy is an Ancient Tradition

In watching the current mini-series “Wheels to the West,” I see the same type solution being applied to Indian children. Such force-evoked therapy does not change people; it merely causes people to conceal their true nature and actions. Winning the battle against sin demands that we refuse to condone unrighteous behavior. It is a genetic condition brought upon every human being by our sinful 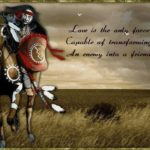 nature. The concepts of right and wrong are not determined by society; they are declared by God. When we pretend that the nature of man can be corrected by forced external behavioral patterns, we work from without. When we accept that sin can be conquered through the truth of God’s word, we work from within.

There is no freedom to sin, not in scripture and not in life as God has ordained it to be. Yet we now accept adultery and fornication without a blink of the eyes. And Even now, many Christians have come to accept homosexuality as a natural conclusion to someone being born with a different generic arrangement. Thus the sin nature is concealed beneath a wave of self-righteous words by a lost and sinful senator – or even a U.S. President.

No, my friend. We do not have a license to sin. There is no free ride. A cost and a penalty that exceeds societies greatest punishments is attached to willful resistance to God’s revealed truths. In our society, the thief who takes your car without permission is cast behind bars. The murder may face life behind bars or even execution. The child molester, the scum of society, is forever banished and marked.

Yet the homosexual, mostly males and most often among those charges with child molestation demand a freedom to sin. They want your children to believe that sexual perversion is an acceptable behavior pattern. But why does it matter so much to these people?

According to comments at Born Gay, a ProCon website, in 2004, PhD, Timothy J. Dailey, Senior Research Fellow at the Center for Marriage and Family Studies of the Family Research Council, wrote the following:

The evidence indicates that homosexual men molest boys at rates grossly disproportionate to the rates at which heterosexual men molest girls. To demonstrate this it is necessary to connect several statistics related to the problem of child sex abuse:

Thus, a tiny percentage of the population [homosexual men], commit one-third or more of the cases of child sexual molestation.”

Weigh Now the Cost of Homosexuality

In Romans Chapter One, Scripture makes clear that homosexuality is a final stage of a nation that has fallen into the abandonment of God. Grace is a gift from God, but the Holy Spirit warns through the pen of the Apostle Paul that we must not count our liberty as a license to sin. Furthermore, Galatians 6:7 makes clear that every sin comes at a cost.

“Be not deceived; God is not mocked: for whatsoever a man soweth, that shall he also reap.”

Would you give a license to kill to a murder? A permit to steal to a robber? A freedom to sin to a homosexual? And think that you and your children will not pay a cost for such foolishness.