↓
Home→Christian→Christian Teachings→Temporal Consequences of Sin, Including Consequences That Can Be Changed Through Natural Means

The Bible addresses multiple forms of temporal consequences for sinful living. In some events, the consequences of sin result in permanent mortal sufferings that can only be removed via supernatural intervention. In other circumstances, the cost of sinful living can be changed through natural means that involve basic life adjustments.

An Example of Natural Deliverances From Temporal Consequences

Many redeemed criminals have pondered the relationship between forgiveness and the temporal penalties for wayward living. Some recite the text in John chapter eight concerning the woman taken in the very act of adultery. The law, as delivered through Moses, commanded that the woman be stoned to death for this crime. However, Jesus in His mercy, offered forgiveness accompanied by instant deliverance from the temporal consequences of the sin.

This is not a supernatural deliverance. It did not require a reversal of natural laws. It called instead upon grace — released because the accusers were forced to recognize the natural state of their own sinfulness.

But for the prisoner behind bars, the questions remains: If forgiveness includes grace and mercy, why then must I pay to full consequences of my sin?

Before leaving this question in an open state, that is to say the questions remains unanswered, I present before you three points of thought:

Consequences to Sin That Cannot Be Changed Through Natural Means

“Good understanding giveth favor: but the way of transgressors is hard” (Prov. 13:15). We know that physical, mental, emotional and spiritual hardships often continue long after men have repented and a transgression is forgiven. 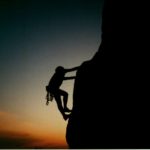 Sin damages so many aspects of life. But when sin separates us from God, the consequences include temporal, spiritual and eternal damages. Unless this issue is remedied by the blood of Jesus Christ, the temporal consequences really become totally immaterial. The penalty for rejecting Jesus Christ is hell fire and eternal damnation. And all the pondering in eternity will never make the judgment on this matter shift by even one degree.

Consequences to Sin That Can Be Changed Through Natural Means

Every sin has an earthly and physical consequence. Not only upon the sinner himself, but also upon many others. When Adam sinned, the consequences involved the certainty of physical death. This curse fell upon Adam, his immediate family and all of mankind throughout the ages.

But what about the sin of laziness?

These sins affect everyone they touch. A lazy man fails to reap a harvest. For this sin, he and his family will suffer. A murderer may suffer a lifetime behind bars, yet he is not an island. The victim’s family must endure their own style of suffering. As does the murderer’s parents, mate and children.

Scripture speaks of “due reward,” (Luke 23:40-43), for the thief on the cross received forgiveness yet his temporal punishment remained in effect. Consider also the plight of the prodigal son. Repentant and sorrowful, he returned to his fathers house yet the temporal consequences of his sin had already demanded a high price in money, time and suffering.

Now go back a moment to the woman caught in the very act of adultery. Jesus said unto her, “Go and sin no more.” The implication is clear. Although her past sins may yet hold sway over her present life, there is a new way that can produce good fruit.

The reformed thief, the redeemed murder the converted gossip may be forced to pay various aspects of temporal consequences. The person once lazy but now dedicated to hard work may find it difficult to re-enter the working world. But in time, the truths of reaping and sowing will manifest a new and rewarding temporal result.

Living In Spite of the Consequences of Sin

It is an endless list of reaping what you sow. A garden full of weeds must be hoed. A marriage broken by adultery must be mended. A friendship choked by gossip must be nurtured back to health. Property brought on by laziness must be conquered by long years of hard work and wise living. A life and family devastated by the use of drugs must be restored through a renewed commitment to clean living. Broken faith must be restored by presenting a trustworthy evidence of change.

And these things, my friend, take time.