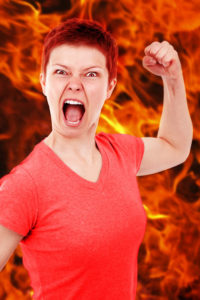 Must Meaningful Communication Include Cursing

After completion of a recent 50-mile MS walk, a Christian woman asked her husband why so many relatively decent people choose to use curse words rather that meaningful terms of communication. In the mists of the discussion, the wife mentioned how one non-Christian female walker said that she identified Christians by their lack of swear words during normal conversation. How sad is that manner of reasoning? Has it really gotten so bad that only Christians refuse to conform to the non-language of foul language?

Thirty years ago, even the most foul-mouthed of men would hold his tongue in the presence of women and children. Today, it seems that women, under the guise of some form of distorted sense of liberty, can and do out curse the most hard living and uneducated men on the earth.

The woman in the opening paragraph of this article is a grandmother. A while back, her eldest granddaughter saw her get a bit angry during a traffic issue. When cutoff by a careless driver, the grandmother released a brief growl and then spoke a blessing over the other driver. Afterwards, her granddaughter made the following statement: “Gram, you don’t have to hold back your cursing just because I am in the car. I’m old enough now to hear it.”

Imagine that. A child is so mislead concerning cursing as to believe that everyone does it and that it is merely a matter of growing old enough to meet the standards of permission. Take shame upon yourself American citizens.

False Teaching on Cursing From the World of Psychology

In a recent article that attempts to explain the psychology behind cursing and swearing, the author strives to convince readers that swearing is beneficial to the human race. He uses words such as cathartic to suggest that curse words help free us from feelings of frustration and anger. He suggests that cursing is a useful substitute for physical violence, and implies that it should be a preferred method for expressing emotional confusion. Cursing, the author says, makes us feel better.

On the flip side, the article’s author declares that swear words also provide positive coloring to our speech and writings. For example: The author believes that jokes, humor, sex talk, storytelling and social commentary are more effective when emphasized with swear words. He actually believes that curses words are an effective means for relaying emotional excitement.

In the end result, the author of this rather foolish line of reasoning actually states that virtually all people use curse words in a consistent, lifelong pattern. He emphasizes the point by scattering foul language throughout the entire content of the article. Thus the article is difficult to read, filled with useless words, and made foul only because the author lacks the skill to produce clean, distinguished copy. Every curse word in use today can be and should be replaced by powerful, descriptive and accurate words of communication.

The answer is illusive. Some speakers are merely lazy. Some people lack education and vocabulary. Many writers and movie producers seek to produce cheap thrills. Most citizens merely follow the pack, thinking that foul language is cool, that cheap language implies courage and boldness, and that cursing is the expected means of communicating with color and authority.

Steven King once said, “Scare them if you can. If you can’t scare them, shock them.” In the context of his material, he was saying that if you cannot entertain the read by inducing fear, then just cut loose with a shotgun load of curse words. If you believe that concept worked for him, you are missing the quality of his skill when the writing focused on meaningful descriptions and dialog rather than useless curse words.

Anti-cursing is not merely a Christian trait. What parent finds pleasure when filth slips from between their child’s lips? Reject the lie. Not everyone curses. Cursing won’t make you feel better, it will make you feel worse for you know within yourself that foul language is ugly and unnecessary. It bears with it a measure of sadness that is a reflection of the shame that accompanies a lack of communication skills.

“No,” the grandmother said to her granddaughter, “I don’t hold back cursing because you are here. I hold it back because it is a repulsive an unacceptable means of communication.”