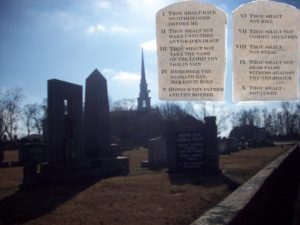 Keeping The Commandments of God

Yesterday, my wife and I attempted to watch a PG-13 rated movie. Apparently, our concept of mild language is greatly outdated. About midway through the movie, one of the actor’s took God’s name in a foolish and useless manner, in the form of a curse. A sudden and terrible thought touched my mind: this nation is under the concept that taking God’s name in vain is a minor curse word, a thing of no significant importance, a common-day, run-of-the-mill, acceptable and even exciting practice. Woe unto a nation that distains the name of God.

I turned the movie off, and then sit and pondered. It is apparent that society still recognizes that the name of God should be treated as sacred and honorable. Else wise, it would not even be considered one of the so-called minor curse words. The very fact that the vain use of God’s name is classed in the PG-13 range stands as condemnation to the system, to the creators of the movie, and to the viewer who abides it.

What happens to a nation that comes to distain the name of God? How does it come about that we should accept such wicked behavior as the norm, or the socially minor violation to our ears, precepts, and conscious? Why are we so blind?

Godless men and women are establishing the standards. These are the people who have no understanding of righteousness. They establish their morals based upon that of the abiding society, personal desires, and the inner prompting of a wicked master. It is a shameful thing.

When every man does what is right in his own eyes, social and moral decline is inevitable.

Look around yourself, my Christian friends. When will you stop tolerating the filth of a Godless nation? When will you decide to abide to God’s standards rather than to the shameful foolishness of a disobedient and rebellious people?

We are not called to force men to be Christians. Neither are we called to tolerate foul and disgusting behavior. We do not have to change the law. It is enough that we simply cease to support wickedness. Or is your heart already so harden as to be unmoved by this repulsive atrocity against the living God of Abraham, Isaac, and Jacob?

I have known the life of a loss and sinful man. It was in my nature to defend the right of others to walk as they so willed so long as that right seemed not to invade the space of another human being. I was wrong.

First you abide wickedness. Next you accept wickedness. Then you agree that it is not really wickedness after all. And finally you will find yourself actively wallowing in the filth of the wickedness.

“Thou shalt not take the name of the LORD thy God in vain: for the LORD will not hold him guiltless that taketh his name in vain,” (Deuteronomy 5:11).